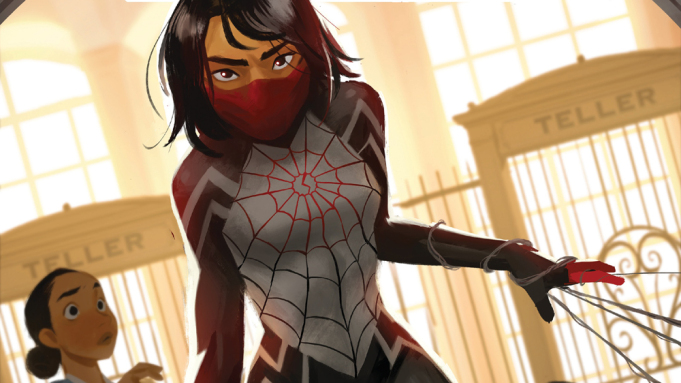 Back in May, Mikey Sutton broke the news about a live action TV series for the Spider-Man character, Silk.  He announced it on the YouTube channel Lords of the Longbox.  Now Variety has posted their own article in September about an upcoming Silk live action series.

When Sutton broke the new back in May, it appeared this series would end up on Disney+.  It now looks like it is being shopped around a bit and may end up on Amazon Prime.

Cindy Moon was at the same scientist exhibition as Peter Parker back in the day.  The radiated spider that bit Peter also ended up biting Cindy before the spider died.  Thus it gave Cindy spider powers similar to Peter’s powers.  Cindy couldn’t control her abilities the way Peter could.  She joined up with Ezekiel, another character who wanted Spider powers, and trained.   She was locked away for years against her will.  Peter becomes aware of her and did rescue her.  She became the new Spidey hero, Silk.

Spidey and Silk have a connection beyond just the spider biting them.  When they are near each other, they have uncontrollable desires for each other.  At first they couldn’t figure out why they kept making out when they should be working together.

Silk has been a part of different super teams including the Webbed Warriors and Agents of Atlas.

Cindy Moon has already been on the big screen. Tiffany Espensen has portrayed Cindy in the Spider-Man and MCE movies.   She is a classmate and a member of the  decathlon team in Spider-Man: Homecoming.  It is unknown if Espensen will reprise the role but since the MCU does like to all be linked, it is very possible.

This will be a fun KOOL character to have a TV series based around.  As long as she is written well, this should be a huge hit for whatever service streams this series.