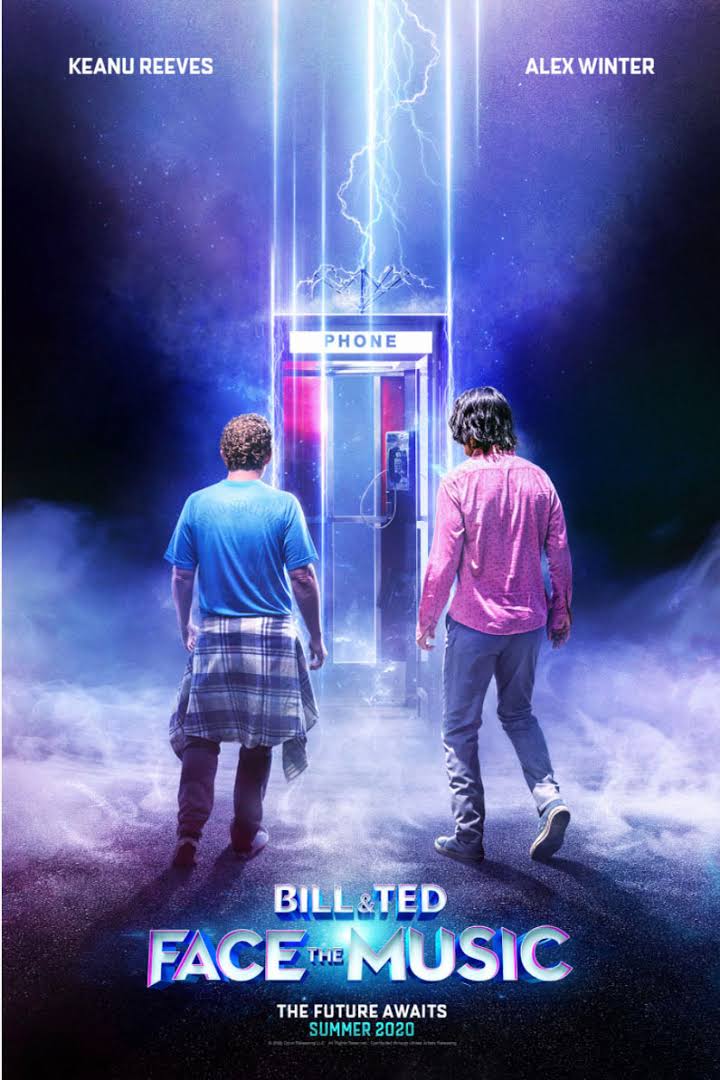 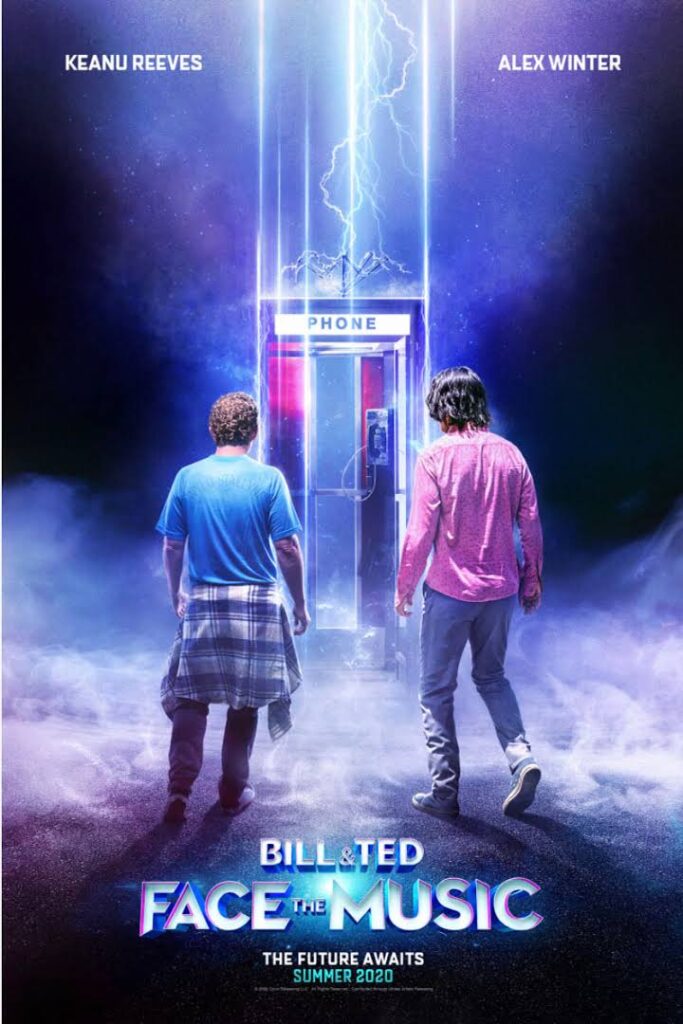 On Wednesday of last week, I had an opportunity to do something I haven’t been able to do in a long time.  I went to the movies.  My buddy Jason got tickets for free to see Bill & Ted Face the Music at the Alamo theaters.

It was a bit of surreal experience.  There is no ordering food when you get there.  If you order ahead of time, they will bring it to you but it is all sealed up.  There is no endless bowl of popcorn or free refills on drink.  You also have to wear a mask the whole time unless you are eating or drinking.  The seating has at least 2 seats between your group and the next.

The weirdest part was watching the movie with my mask on the whole time.  I won’t lie about it.  It did detract from the experience but honestly not enough to keep me from wanting to do it again. It was awesome to get out to the theater and to be entertained.

I fully appreciate the theaters that are able to open. Some cannot because of restrictions in their city or state.  The management did all they could do to make it the best experience possible while keeping their guests and staff safe as possible.   Kudos to everyone at the Alamo in Springfield, MO.

It has been 30 years since Bill and Ted went on their first excellent adventure.  Their band that formed at the end of Bogus Journey had some success but they never wrote the song that would bring the world together.  The band broke up but Bill and Ted continue to make a life in music by playing small venues and weddings.

Bill and Ted are both married and each have a daughter.  We met them at the end of Bogus Journey as babies known as “Little Bill” and “Little Ted” but are Thea and Billie. The girls are now in their 20s and are definitely their dad’s daughters.  Billie and Thea live and home and listen to music all day long.

Bill and Ted’s wives aka the Princesses, Elizabeth and Joanna are not happy with their current lives.  Their husbands aren’t making much money and are not focusing on them.  They all end up in couples therapy (a couple of couples).  It is a fun and insight look at their lives together.  We can see how Bill and Ted are completely enmeshed together.

This leads Ted to doing some soul searching.  He is about to give up on writing the song that brings the world together.  He contemplates taking a real job and giving up on his dreams.

Before Ted can give up, they are visited by a time traveler, Kelly.  She whisks the guys away to the future to talk to The Great Leader.  Come to find out that Kelly is Rufus’ daughter and The Great leader is Rufus’ widow.

At this meeting we learn that not only will the song unite the world but it will keep all of time and space for collapsing in on itself.  This song that hasn’t been written yet has to be played in an hour and a half or the end of things as we know it. The Great Leader gives them their choice in guitars and stuff to write the song.  But Bill and Ted instead decide to get the song from their future selves so they take Rufus’ old phone booth time machine and go off.

The Great Leader is very unhappy.  She believes the prophecy could mean that time could be save if Bill and Ted are killed.  To the disbelieve of her daughter, Kelly, the Great Leader orders that a killer time traveling robot to take down Bill and Ted.  Kelly returns to current day in a hope to save Bill and Ted.When Kelly gets back, Thea and Billie ask to borrow Kelly’s time machine to put together a band of legendary proportions.  They have an excellent adventure in bringing back history’s greatest musicians.  They recruit Louis Armstrong, Jimi Hendrix, Mozart, and many more to join the band.
Meanwhile Bill and Ted continue in their attempt steal the song from their future selves.  They find their future selves are not very helpful. The future selves blame the current Bill and Ted for losing the wives. They meet several versions of themselves but the only ones that were helpful were the really old Bill and Ted who gave them a copy of the song on a drive.The Killer robot shows up.  He tries to kill Bill and Ted but misses and kills Ted’s dad. Then he shows up and accidntly kills Thea, Billie, Kelly, and the band.  The robot is very upset that he killed the wrong people.  He finds Bill and Ted and confesses what he did and refuses to kill Bill and Ted.  Bill and Ted realize they have to get Billie and Thea from Hell so they cause the robot to kill them when he tries to commit suicide.

Bill and Ted with the help of Thea and Billie are able to repair their relationship with Death.  They welcome him back into the band.  He helps them all escape Hell once again.

The drive with the song on it is broken. But in this they realize they weren’t suppose to write the song but their daughters were.  They give up the lead to their daughters and use their new band to make music. Bill & Ted and their wives delivers instruments to all people their through time to play at the same time and saves the world and time as we know it.

What I liked: (More Spoilers)
This was fun.  It is a wonderful ride into nostalgia with Bill and Ted.  Alex Winter and Keanu Reeves don’t disappoint in their return.

I totally felt for Bill and Ted.  They have been seeking their goals in life and at mid life are ready to give up.  They were promised they could do great things like all of us Gen Xers but it hasn’t happened yet.  These characters caused me to related and briefly examine my life.  Really dude, it did.

The historical musicians were a blast. Louis Armstrong and Jimi Hendrix really stood out.  There was a definite vibe back to the historical figures in Excellent Adventure.

There is an excellent end credit scene. Stay through the credits and you will not be disappoint. You need to stay and watch if you see this movie either in theaters or stream it.

What I Did Not Like: (Spoilers)
I didn’t like how under used the historical musicians were.  They had fun interactions when we meet each of them.  But didn’t have the pay off at the end like we see with Abraham Lincoln telling us to Be Excellent to Each Other and Party On Dudes.

The ending as a whole was a disappointment to me.   I felt it built up but then didn’t deliver.  The band they formed didn’t even get focused on for the ending.  I would say the ending was quiet bogus dude.

This is a fun ride.  It is fits perfectly in the Bill and Ted universe.  If you like or love the first two movies, then this will be a most excellent experience for you.  It won’t win an Oscar but it is a ton fun.  Nowadays with COVID, having a little fun is worth a lot.