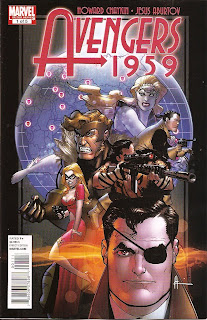 What if the Avengers that we know (Thor, Iron Man, Captain America, Hulk, Ant Man, and Wasp) were not the the original team of Avengers? What if Nick Fury had an Avengers team back in the 1950s? This 5 issue limited series tells an adventure of this team.  This team has some names that you will know and others that you will not including some modern day villains.

Plot: (Spoiler Alerts through whole article)
Previously in the Avengers, it was revealed that Nick Fury had an Avengers team prior to creation of the Avengers.  They had a flash back to the first adventure in  the New Avengers #10.

This group of early Avengers are at a nice restaurant cerebrating their previous victory. Fury’s group has many early heroes and some who later become villains.  Ulysses Bloodstone is a monster hunting immortal with enhanced speed, strength, and agility. Kraven the Hunter is best known as a Spider-Man villain but he is a famous game hunter also with enhanced speed, strength, and agility. Namora, cousin of Namor the Sub-Mariner, has flight, super strength, near invulnerably, and underwater abilities. Even most non-comic fans know Sabretooth and his love/hate relationship with Wolverine.  Silver Sable, father of the current Silver Sable, has no powers but is  a formidable fighter with numerous skills. Dominic Fortune is a fortune seeking adventurer in top physical shape.  The Blonde Phantom, who is not with the group at the beginning, is a masked crime fighter with no powers but she may also be a spy.

Each of the members at the dinner were attacked on the way home by the Thousand Year Reich. The attacks were well plotted out and could have killed their targets. But each attack fails but it definitely get the attention of these Avengers.

The Blond Phantom is undercover in Latveria, future home of Victor Von Doom (Dr Doom).  She is spying on Obergruppenfuhrer Dieter Skul, who is an international criminal and former Nazi.


Review:
Art:
I found the art to be beautiful. It had the look and feel the 1950s. Many of the scenes had great background details.

Story/Plot:
This story is a lot of fun. There is adventure, intrigue and action. I love the bad guys attacking each individual member.

There are a lot of great little details in this book. I love the scene where Sabretooth is hitting on Namora. Kraven, who is her lover, pulls out a gun and shoots Sabretooth point blank in the face because he knew about Creed’s healing factor.

I really enjoyed the scene on the boat between Sergei (Kraven) and Nomora. The banter back and forth was fun. The boat blows up and Nomora flies Sergei off the boat. Kraven grabs a gun blows up the bad guys ship.

Dominic Fortune is flying a small plane with a young lady companion. They are enjoying an intimate time together. A fighter plane flies up to them and starts firing upon them. Fortune puts on a parachute for himself and his companion.  Then he shoves her out of the plane and jumps out afterwards.


My REVIEW:
I loved this comic.  It was fun and full of action. It had a great plot. The pacing is really good in this comic book.