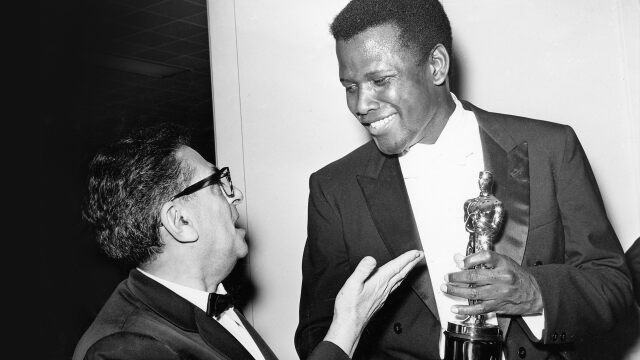 Acting legend Sir Sidney Poitier passed away at 94 years of age on Thursday January 6, 2022.  Poitier s cause of death was not immediately given.

Poitier’s family lived in the Bahamas as tomato farmers.  They were on a holiday visiting Miami and his mother went into early labor unexpectedly.  Poitier was born in Miami, Florida, which gave him U.S. Citizenship (Bahamas were a British territory at the time).  He
but he was born unexpectedly in Miami while they were visiting for the weekend, which automatically granted him U.S. citizenship. Poitier lived in the Bahamas until he was 16 and moved to New York.  He served in the Army but found his love for the performing arts.

Poitier was picky in the roles he selected to play.  He wanted to represent “Black Excellence” when most roles for black men were not uplifting.  He was quoted several times that he felt a responsibility to a shining example for black Americans. Poitier had numerous amazing roles in the 1950s and 1960s when racial issues and awareness as at a high level with segregation.

My first introduction to Sir Sidney Poitier was in the classic 1967 movie, Guess Who’s Coming to Dinner.  I chanced on this movie in my early 20s when I check it out from a local library.  This was a film that positively showed an interracial engagement.  Poitier portrayed Dr. John Prentice who fell in love with Joey Drayton, daughter of two rich liberal socialites.  Both families were shocked and had to work through their own issues and hidden prejudice.  The amazing cast included screen legends Spencer Tracy and Katharine Hepburn along with Katharine Houghton, Beah Richards, Roy Glenn, and Roy Glenn. This film moved me in a lot of way.  After that moment, I found every Sidney Poitier movie I could find and watched them.  Patch of Blue, Heat of the Night, A Raisin in the Sun, Lilies of the Field, and “To Sir, With Love” are a few of his amazing films.  I have to say To Sir, With Love and Guess Who’s Coming to Dinner are my favorite films by Poitier but the rest are incredible too.

Thank you Sir Sidney Poitier for the fantastic movies and characters over the years.  You are missed.  Please rest in Peace.