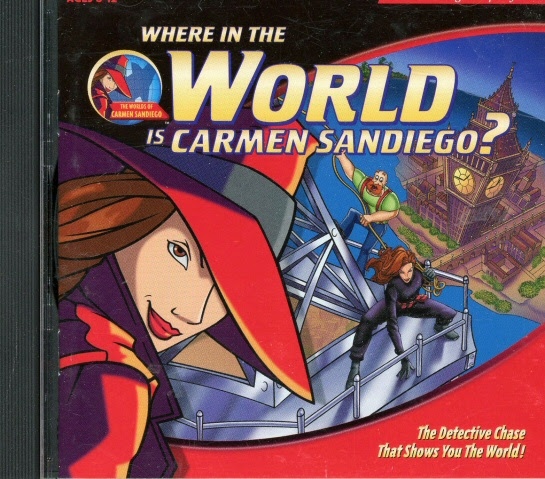 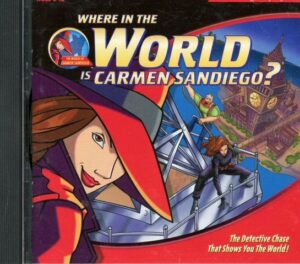 Welcome to my very first article on Geeky Kool!!!

It was hard to think up an article, so my mom suggested some topic ideas for my first article. This gave me an AWESOME idea! I wanted to write about one of my favorite educational video games, and it has old-timey graphics and music from 1985.

This hit educational game got people’s attention and thinking caps on in the game known as…… (Drum Roll music) …. Where In the World Is Carmen San Diego? 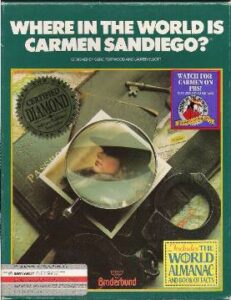 This game started on April 23, 1985. It was made by Broderbund Software but is now owned by Houghton Mifflin Harcourt. It was originally created as a 5 1/4-inch floppy disk for the Apple II Plus personal computer.

Since its debut, it quickly became popular and still is today. The game grew include to more video games, board games, and TV shows across the globe. Today people ponder the geographic question: “Where in the world really is Carmen San Diego?”

Did you really think that there is only one topic in Carmen’s games? Well, you thought wrong Colonel Sanders! There are TONS of Carmen Sandiego games such as:

Throughout the 90s, University Games created and published many board games and at least one card game based on the Carmen Sandiego television show. Broderbund even made a special Christmas offer when any video game was purchased with one of these board games.

Today, different board games are available from multiple sources as the popular series continues to expand. Many can be purchased at local game stores and online vendors, including Amazon.com.

During the 1990s, the Where in the World is Carmen Sandiego?, a special game show, aired on TV September 30, 1991, and ended December 22, 1995. The show featured middle-school kids who came to compete and track down Carmen and her gang by solving quizzes, puzzles, and strategy. The hosts are the “Chief” played by Lynne Thigpen, with co-host Greg Lee, and featured the band named Rockapella.

Sandiego’s popularity spilled over into the animation genre.

In 1994, the cartoon called Where on Earth Is Carmen Sandiego, produced by DIC Productions and aired for 5 years on Saturday mornings during FOX’s Fox Kids Network.

This show taught kids about history and geography and the story centered around Zack and Ivy, a pair of siblings, who try to catch Carmen and her greedy gang. The brother and sister duo always manage to stop Carmen’s gang but not the red thief because she is too slick and cunning. But where can she be?

In the newest installation of Carmen’s adventures, Netflix’s adaptation takes Carmen’s story in a different direction. Carmen attempts to escape the clutches of V.I.L.E. and thwarts the evil organization’s plans by stealing back global treasures and returning them to their rightful owners. This series is rated TV-Y7 but is enjoyable for all ages. Oh, and remember Zack and Ivy? They return to this series as a pair of twins who aid Carmen in her endeavors.

Overall, the Carmen Sandiego franchise began as a humble floppy disk for a personal computer and quickly grew into multiple genre formats because of its popularity. There’s even a week dedicated to the character where schools across the US hold themed events! Are you a Carmen fan? Let me know what you think in the comment section below!