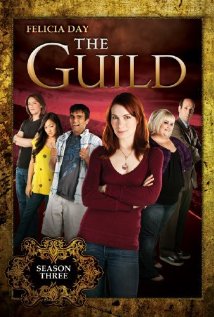 I recently started my subscription to Netflix. (No I haven’t been living under a rock but I had an old TV- now I have a new 47”) As I was searching for cool things to check out. I stumbled upon The Guild. The Guild is a webseries about online role playing gamers. Netflix carries the episodes in a combined seasons.
Plot:
The Guild is about group of gamers who play an unnamed online MMRPG (Massively Multiplayer Role Playing Game). This group has formed a guild, (a team to help each other in the game),The Knights of Good. The main character is Codex, aka Cyd Sherman outside of the game.  She has another guild member, Zaboo, come to live with her. Zaboo mistaken Codex’s game flirting as a relationship. She doesn’t know how to tell him that he misinterpreted her flirting. She gathers the Guild for a live meeting, which has never occurred before, to help her deal with Zaboo and his scary mother. This begins the interaction between the game geeks. They continued live and online interaction between the Knights of Good brings the drama and hilarity.
What I liked about this Show:
I really like Felicia Day who is the star of the show. She brings a human side to her character Codex. She has a good comic sense and appears to be an authentic geek. She seems comfortable in her various geek roles over the years from Eureka, to Dr Horrible’s Sing Along Blog, to My Boys and everything thing in between.
This show is written by someone who online games and gamers. Too often shows and movies are written about a subculture but with no one the show or writing staff understand that culture. It is apparent from the beginning the writers and cast have a good understanding. As a geek who has played MMRPGs, this is a pretty honest look at some of the gamers out there.
I love the quirky characters in this online series. They make me laugh because I know many people who are similar to them. I love the character of Clara,who uses her real name as her screen name, and ignores her kids and husband while she plays the game all day long.
Fellow geek star,Wil Wheaton, has a fun role in season 3 and 4. I really enjoy the humor of Wil Wheaton. He brought his A Game to The Guild.
What I did not Like:
I wish this show was more appropriate for my 11 year old daughter. She would love aspects of it. It more geared for old teens and above so in a few years, I will be able to introduce her to it.
Review:
This is a wonderfully fun series that will connect with anyone engrossed in geek culture especially in the online gaming culture.
My Grade:A
Share
Facebook Twitter Pinterest Linkedin