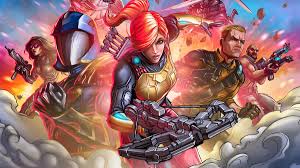 Yo JOE! COBRA! The battle cries from the 1980s comics and cartoon, GI Joe! Many of us kids eplayed GI Joe and Cobra back in day. Now we will be able to play many of our favorite heroes and villains from the series in this new video game.

GI Joe: Operation Blackout is a new team based 3rd person shooter game.  It will allow you to play as a Joe or Cobra with 12 well known characters include Duke, Snake Eyes, Cobra Commander, Destro, Roadblock, and Storm Shadow. It will feature an 18 mission campaign for single player you can play PVP multiplayer.  It will come out on October 13, 2020 on PC, Nintendo Switch, PS4 and Xbox One platforms.

The story in the game is an original story but based on the 80s comics.  If you didn’t know, the comics were even better than the cartoon.  The stories were compelling and the art beautiful.