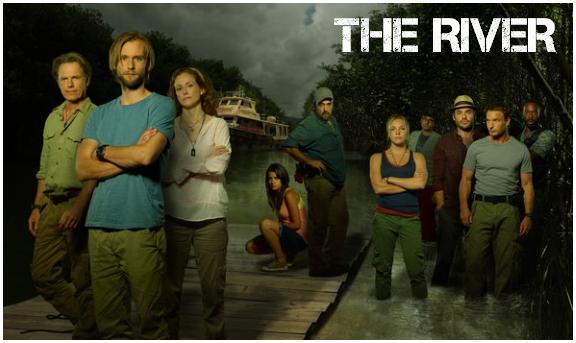 I love a show that can keep me guessing. A little mystery and suspense will keep me watching. For years, LOST pulled me in by giving me questions. Can the River do this for me?

Plot:
This series is a lost footage show. The former king of the wild lands/wild animal shows, Emmet Cole, has gone missing. His wife and son join the crew of a tv show to go looking for Emmet on the Amazon. The show quickly become spooky with a horror aspect of it. There are strange, unexplained, and maybe magical things going on in the Amazon.

There have been numerous of bizarre things that the crew has run into. They had vines and plants attack the boat. They found a jungle full of old dolls hanging from the trees. The crew was poisoned by some natives and they lost their sight. They found a former member of Emmet’s crew hanging from a vine and he was alive but continued to be hung because of video taping a native who went off to die. On tonight’s episode, the crew met another group but found out that they were all members of a ghost ship.

What I liked about this Show:
This show keeps me guessing.  It is a suspense and horror filled show that leaves us with lots of questions. It does have a LOST feel to it.

What I did not Like:
I am not a fan of the lost footage fake documentaries.  I have already grown tired of this format.

Sometimes the acting is not great. The show has moments where I shake my head with the acting.

Review:
I am enjoying this show. It is not the greatest show but also not the worst. The acting can be spotty. But it does have moments of really good suspense and it does leave you with lots of questions.