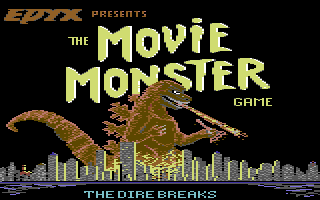 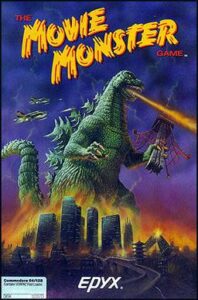 Welcome to my second article!

You may have read my first article about Carmen Sandiego and her history.

Now it is time to hop in my next article which is another one of my favorite retro games called, “The Movie Monster Game.” EPYX made this iconic awesome game on a floppy disk. It released in 1986 for the Commodore 64 and Apple II in 1987.

The story takes place in a movie theater where the player selects a mission and character and featured random advertisements from other games. The game is featured as the theatre’s featured movie and changes depending on the player’s choices and gameplay.

The player could select one of five monsters to play: Godzilla (the only monster with a copyright!), Sphectra (a giant wasp), The Glog (a green blob-like monster), Tarantus (a giant Tarantula), Mr. Meringue (a generic version of the “Stay Puft Marshmallow Man” from Ghostbusters), and Mechatron (a knock-off of “Topspin” from Transformers).

Players had the option to destroy specific landmarks such as the Statue of Liberty in New York City, the Tokyo Tower, in Tokyo, Japan, and Big Ben in London, England. Additionally, the game featured cities such as New York City, San Francisco, London, Tokyo, Moscow, and Paris.

The game included five different tasks: “Berserk,” “Escape,” “Search,” “Destroy Landmark” and “Lunch.” Each goal gave players random tasks where they had to select the monster, the location, and task.

Mechatron: Scientists built him to be an ultimate soldier. Unfortunately, there were some bugs and glitches in the robot, and he had only two things in his program: To fight and to go to war.

The Glog: A horrifying green blob created from pollution.

Sphectra: A giant wasp that does sonic blast waves and a different version of Mothra and will destroy them all!

Mr. Meringue: A giant sticky of marshmallow tower who had two different theories. Some say he was cooked up in a bakery in Delaware. Others say he was the second prize in a bakery contest made by Mrs. Johansson. Whatever the case, this sweet monster was about to give cities a bitter end.

According to Moby Games, a version is available to play on Antstream, but I have not had experience playing it.

If you’re interested in seeing a sample of this game, it is available at Internet Archive, titled The Movie Monster Game.

If you’d like to see this game in action, YouTube channel, DerSchmu offers this playthrough where original audio and visuals are available.

Overall, this retro game looks like it was a lot of fun to play. It may be a little slow-paced, but the controls are simple.

Which monster would you like to play? Which mission do you think would be the most fun? Let me know in the comments below!

Stay tuned for my next article on “Rampage”!