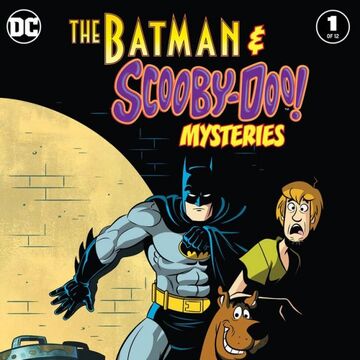 DC Comics has introduced a new all ages comic teaming the Worlds Greatest Detective and the Scooby Doo Gang.  Batman & Scooby-Doo Mysteries will be a digital first comic launching on Saturday, March 27.  There will be 24 digital chapters that will be collected in 12 print issues available at your Local Comic Shop.

In the kick-off story by Ivan Cohen and Dario Brizuela—an adventure when Batman discovers his original purple gloves have gone missing—Velma, Shaggy, and Scooby-Doo travel back in time to Batman’s Year One era to solve the case! Will this time-traveling heist have a happy ending? Batman & Scooby-Doo Mysteries #1, “Glove Story,” written by Ivan Cohen with art and cover by Dario Brizuela, begins with the first of two DC Digital First chapters on March 27 followed by a print issue collecting the same story on April 13.   (DC Comics)

DC DIGITAL FIRST comics are available on DC Comics app on iOS and Android and on Comixology.