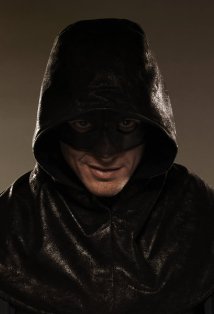 NBC premiered their new super hero television series, The Cape, on Sunday night. The series started with back to back episodes.

About this Show:
Vince Faraday is a good cop surrounded by corrupt police in Palm City. He is a family man who loves his wife and son. He is set up and framed for the murder of the new police chief and for being the super-villain “Chess”. He barely escapes wiht everyone believes he is dead. He is trained by a group of Circus criminals and takes on the identity of his son’s comic book hero, The Cape. He teams up with the Circus criminals and super-techo-wizard Orwell (Summer Glaus) in an attempt to bring down the real “Chess” and clean up Palm City.

What I liked:
This is an old school super hero show.  It takes place not in the real world but in a world where masked villains already exist . It jumps into the action right away. There is no struggle with “why would I do this”. which was a common theme on Heroes or No Ordinary Family.

It does not take itself seriously. The show realizes that it is a comic book series. It gives plenty of nods and winks to the comic fans out there.

I really like the focus on Faraday’s wife and son. They are not killed off which is refreshing for super hero/ vigilante shows/ movies. The show does involve them and are an essential part of the plot of the series.

It has Summer Glaus. That makes it geek-tastic all on its own.

What I did not Like:
At times, this show becomes a little too cheesy and cliche.  I don’t mind this a little bit. But there are times during the first two hours where I rolled my eyes and laughed at the extra sharp cheesy dialog.

There were plot holes a mile wide at times. Why would he become this “hero” to protect his family but fail to make a mask until the second hour of the show? Why not use your allies to help you take down the master mind villain instead of attacking him at his home alone?

Orwell is a knock off of several other characters and does not appear to offer much growth for Summer Glaus. Orwell is DC’s Oracle, Smallville’s Cloe Sullivan, and most accurately Dark Angel’s “Eyes Only”. Summer has made a living by starring in geektastic shows. She needs a way to mold this character into something more original than one of the characters above. I hope the writers will allow her to grow past by adding more to this character.
My Review:
As I told a friend of mine, this show has potential. You have to watch it with the anticipation that it will not be a high brow show about people dealing with super hero life. It plays like a comic from the 70s and if you enjoy that then you will love this show. This show has room to grow and become a really fun series.