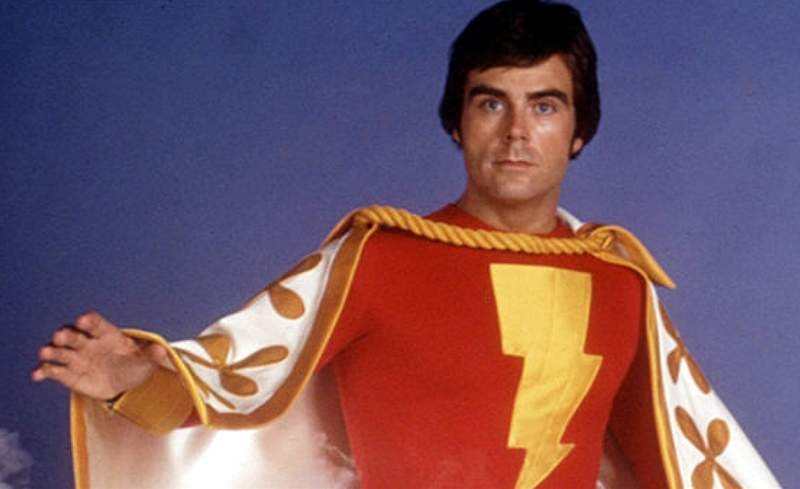 On the last issue of Heroes, Villains, and Me, we discussed some of the history of Captain Marvel aka SHAZAM and some of the reason I think the name change to SHAZAM doesn’t work.  I referenced that for me it is a much bigger issue.  Part 2 will dive right into what ties this character to me and why it is so important to my geekdom and identity.  Check out  Heroes, Villains, and Me: It Is “Captain Marvel”, Not “Shazam!” Part 1.  if you haven’t read it.

Let me start of by saying, “Hi I am Larry and I a FANBOY.  I have been a Fanboy for Captain Marvel all of my life.”

My connection to Captain Marvel goes back to 1974. I was but 4 years old. At the end of Saturday morning cartoons (big fans of Saturday morning cartoons), there came a new live action show.  It had a teenage boy and his guardian going around in a RV and helping others.  When the teenage boy got in trouble, he would say the magic word, SHAZAM and become the adult hero of Captain Marvel.  This was the TV show, SHAZAM!  I was engrossed into this series from the moment to premiered on TV.

As an Adult, I have gone back and watched this show.  It is so BAD but as a kid it was so amazing to me.  I was four and it was the 70s after all.

There were two superheroes that captured my imagination as a kid, Spider-Man and Captain Marvel.  Both where teens that were given great abilities.  I could relate to both of them.  Captain Marvel provided the fantasy of magically becoming an adult superhero.  This is a huge fantasy for a young boy in an Impoverished rural home.

Captain Marvel become my first Cosplay.  I convinced my mother to give up one of her towels and a clothes pin to me.  I would pretend to be Billy and in trouble and would say SHAZAM! to be transformed in the mighty Captain Marvel.  I spent hours a day playing this way with my imagination.

This went far beyond my 4 year old mind.  I kept my cape (towel and clothes pin) with me everywhere I went.  My older cousins would tease me at my grandmother’s home for being into Captain Marvel instead of being good at sports like they were.  I even took it with me to Kindergarten and wore it on the playground.  I met the same disdain from the classmates as I did from my cousins.  This did lead to my first experiences with bullies in both my cousins and my classmates.  Unfortunately, saying SHAZAM didn’t make me big or powerful and the bullies usually won.

I didn’t fit in with these groups because of my love for Captain Marvel.. and honestly my love for comics and all sorts of geeky stuff.  But that didn’t stop me.  Even at an early age, I didn’t care what others liked.  I was fine with them not liking me as long as I could be me, which was tied to Captain Marvel in a deep way.

As time went on, I outgrew playing Captain Marvel.  Eventually, Star Wars became my geeky obsession.  But for a good 3 years of my childhood, I thought I could become Captain Marvel if I was in trouble.

Captain Marvel would remain one of my favorite characters. I would pick up almost any comic as a kid and as a teen that had Captain Marvel in it.  I loved that he had an innocence and was a bigger boy scout than Superman.  I was excited when they developed the more magical piece of Captain Marvel’s abilities in the 80s.

This leads me back to Friday.  I was about to reply in an intense manner to my friend (see Part 1 for more details), when I realized that my reaction was about more than a name change.  Changing Captain Marvel’s name to SHAZAM! was deeply personal because of my connection to the character and my identity.  I saw myself as Captain Marvel as a kid and maybe a part of me still does.  It almost felt like DC had changed my name without my permission.

I understand my reaction was not rational.  DC didn’t really change anything about me.  My friend wasn’t supporting DC trying to change me in any manner.  But it felt like it in the moment.  (I do give several rational reasons on why the name change doesn’t work in part 1).

We all have things in the geek world that feel more personal to us.  These companies make changes to these without considering how it might affect the fans (you know the consumers that pay you). In the moment it can be difficult to understand.  They honestly have no thought how deeply fans feel for these characters.

What sort of geeky/ nerdy things do you have a deeply emotional tie?  Let us know.  Geeky KOOL Present: Professor and Ace will discuss this very topic on Tuesday.