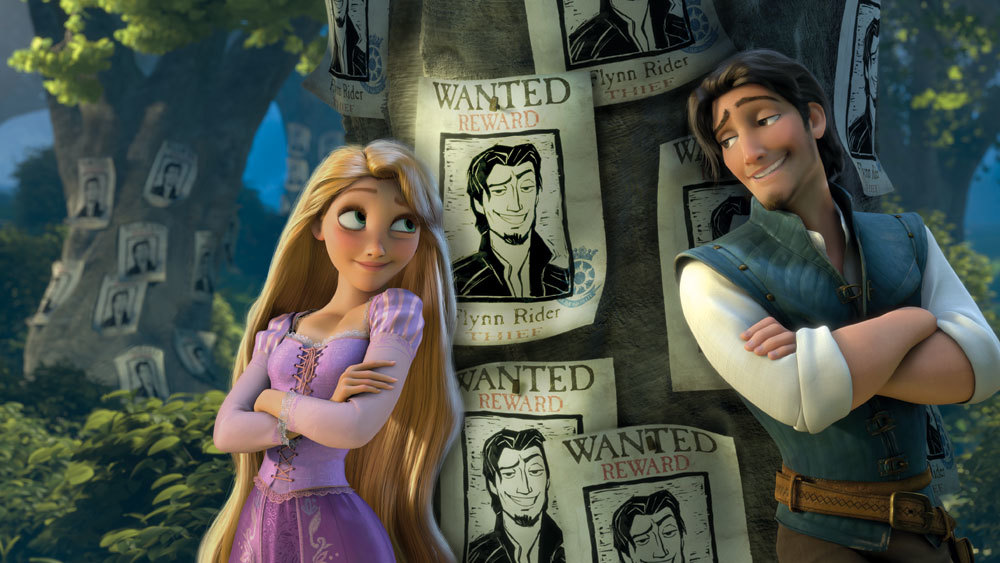 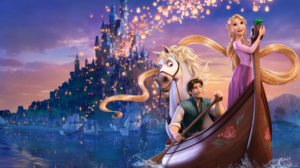 It is my esteemed honor to wish Rapunzel, Flynn, Pascal, Max, and the whole crew of this hair-raising masterpiece a very happy 10th anniversary!

This movie has a special place in my heart.  Personally, I think it brought Disney out of its more modern slump period (in addition with “Princess and The Frog”), going back to its princess/fairy tale roots.  Still, “Tangled” had a silky twist: it focused on both the fair lady and male lead pretty evenly for a ‘princess’ film; the changed title from “Rapunzel” to “Unbraided” and later “Tangled” shows the approach to appease to both genders.  And it does not disappoint with its action, snark, humor, and ‘thugs’ at the tavern.  But it still has plenty of heart and warmth, enough to rival the sun.

This first full CGI Disney fairy tale/princess movie was a milestone in animation, winning the National Movie Awards 2011 in this category.  “At Least I See the Light” also won best song in the 54th Grammies and the Las Vegas Film Critics Society.  I agree tenfold for Derrick and I chose this song to be played during the light candle ceremony during our wedding.  ^_^

Mandy Moore and Zach Levi have a fantastic, realistic, and sarcastic rapport that works so well.  Eugene is someone we all either want to court or be like with the smolder.  The animals are darling in this too, grand mascots! And you know I love this soundtrack! In fact, this film was the last Disney movie I saw before I got married the following summer, sort of a milestone from childhood to adulthood, but I still kept my childlike wonder, just like Rapunzel.  It helps me keep my dreams.

Plus, I have always had long hair and am scared of the outside of the world! LOL! So, Rapunzel’s kindness and bravery to tackle the unknown, trust Eugene, and live out her dream, but still be concerned for her ‘mother,’ makes her such a fantastic and lovely role model.  I like cosplaying as a casual PJ version of her with all the props (Pascal plush, a purple flag with a sun symbol, paintbrushes, and of course, my tiara and frying pan.  I am training in the art of frying pan combat for protection!).  Purple is my favorite color too.

So, have I bought the exclusive 10th anniversary Rapunzel Funko POP with the lantern?  Yes.  Do I own Rapunzel gloves, PJs, a shirt, necklaces, slippers, and a new adorkable peasant dress with hidden Pascals and lanterns in the fabric hidden in its glorious royal-hued fabric?  Yeah.  Did my best friend Cat paint a Tangled lantern and quote for my birthday a few years ago and get me a print of this power couple from Disney World?  For sure.  Is the soundtrack one of my favorite for an animated film in the last decade?  Totally.  Was I so pumped to meet the long-haired beauty at Disney World and was not disappointed?  You know it, kids! Do I think their level in “Kingdom Hearts III” is incredible?  Epicly so!

SPOILERS: In fact…a fellow wonderful author friend of mine and I wrote a fan theory involving Eugene and his now stronger hand thanks to Rapunzel healing him.  How else could he cut that much hair in one smooth cut while he was extremely weak?

So, grab your chameleon companion, brush your hair, grab a loved one, and go on an adventure to follow your new dreams, painting the way for the light.  Glow, little flowers.  Just make sure you watch some “Tangled” or the great cartoon TV series (all on Disney+). 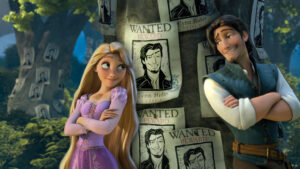