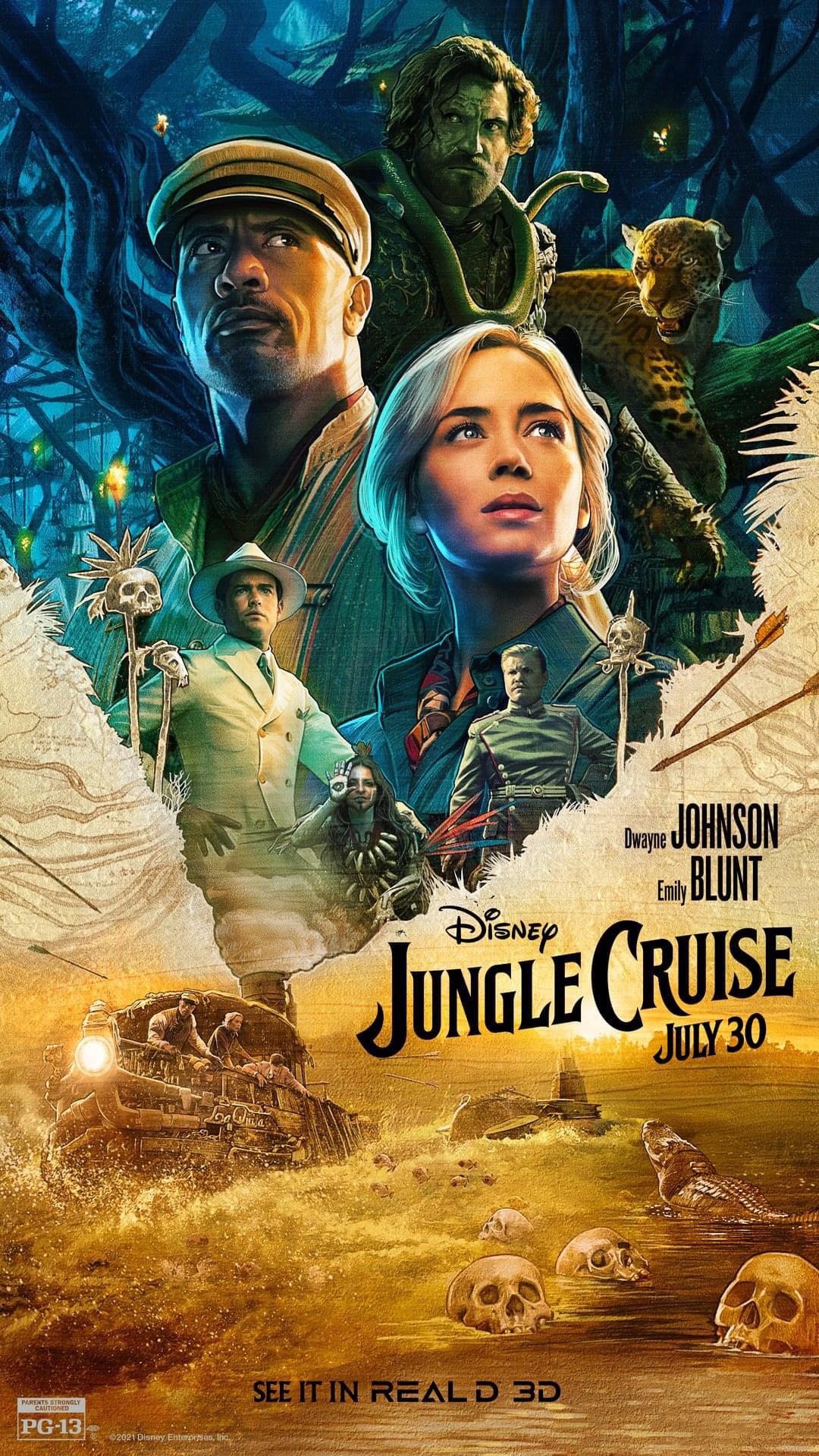 How do you take an original Disneyland ride that opened way back in the 1960’s and turn it into a movie?  That was the question going into the summer release of Disney’s latest “blockbuster movie”.  Well for starters you get 2 lead actors, who can hold their own whether it is dealing with action pieces or comedy in Dwayne “Rock” Johnson and Emily Blunt, add in notable character actors such as Paul Giamatti and Jesse Plemons, a really good backstory, and callbacks to the original ride, and you get “Jungle Cruise”.  The movie is the story of a guy named “Frank Wolf”(Johnson) who give tourists a boat ride down river, complete with “waterfalls”(the backside of water), Rinos(which don’t live in the Amazon), tribesman who shoot blow darts into Franks boat(all callbacks to the original ride), add in really bad jokes from Johnson, while he hucksters people out of their money, because he is in debt to Giamatti(who owns “all the boats”).  Emily Blunt plays Dr. Lily Houghton, a female scientist who is looked down upon by the Royal Society, because they consider females to be inferior to men(1916 London).  She wants to search for the “Tree of Life”, whose petals are supposed to have magical properties and have great healing power.  Jesse Plemons plays Prince Joachim, a German aristocrat who wants the petals to help Germany in the war, and for his own immortality. Jack Whitehall plays Lily’s brother Macgregor Houghton, who was disowned by family when it was revealed he was Gay, Lily stuck by him, and he is now her reluctant assistant.  The scene with his luggage and weight on the boat is great.  There is also a well done CGI Tiger named Proxima, who is Frank’s pet.

The story is rather basic, Johnson and Blunt head down river on a “Jungle Cruise”, pursued by Joachim in his Submarine, this makes for some explosive action, as well as adds a level of danger for the trip.  There is also a backstory involving Spanish Conquistadors, and the original quest for the Tree of Life, which dovetails well into Franks and WHY he stays on the river doing a hucksters job.  This movie has the same type of feel that Pirates of the Caribbean had, concerning translating a Disney ride into a movie, which is a good thing.  The movie explores a few different motivations and ideals including the role of woman in society, greed and power of colonizers from long ago, why people give up on their dreams, and what true friendship between humans and animals really looks like.

Since its release last Friday both in theaters and on Disney+(PPV), the film has made approximately $71 million , about half of that from theater screenings(which was better than expected).  This new model of releasing both in theaters and streaming for a premium price, has upset both actors(ScarJo is suing Disney over Black Widow) and theaters, as they lose money with the streaming competition.  I wonder how long media companies are going to keep this up(Warner Bros. has said they will do it all year with HBO Max). I have my own thoughts on this, but I will share them in a future blog.

I like this film, it was campy and fun. It had enough callbacks to the ride(which I remember going on as a child in the 70’s), to make it like a trip back in time.  The actors ALL played their parts very well, and that helped move the story along at a steady pace.  Most “customer” reviews give the movie a solid B+ to A- grade, and that is a fair grade.  It doesn’t hit a home run, and at a shade over 2 hours it may be a bit long for little kids, but pre-teens, teens and adults should be able to sit through it with no problem. Disney has already announced talks of a sequel.