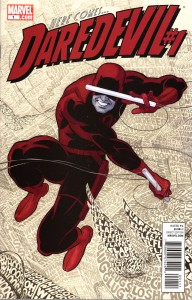 Daredevil was the first superhero with a disability.  Matt Murdock, Daredevil’s secret identity, is a blind lawyer. He has a super ability of sonar/ radar sense which enables him to fight and compete against villains with full sight.

The Daredevil comic is being relaunched. The staff of this title decided they wanted to make Daredevil (at least issue #1) available to the visually impaired. Here is the LINK to the Audio File. The staff of Daredevil lent their voices to the various characters in Daredevil #1.  Super star writer, Mark Waid, not only wrote the comic and script but provided full panel descriptions from his script.

This is super cool and very smart at the same time.  Making Daredevil available to the visually impaired makes me proud to be a comic book junkie.  You just made comics accessible to a group that has not been able to enjoy this art form.

The comic book industry is hunting for new readership.  Opening the door so comics might become more accessible could bring in some badly needed readership.  And it sure is not bad press.

I hope that this is not just a one shot.  My desire would be for every new issue of Daredevil would have an audio file. It would be fantastic if Marvel Comics would follow suit with all of their titles. If Marvel does this, then DC and the other comic book publishers would have to follow.

Even if it is just a one shot, it is still very awesome.  Great job Marvel Comics especial kuddos to Senior Editor Steve Wacker, Mark Waid, and the rest of the Daredevil staff.