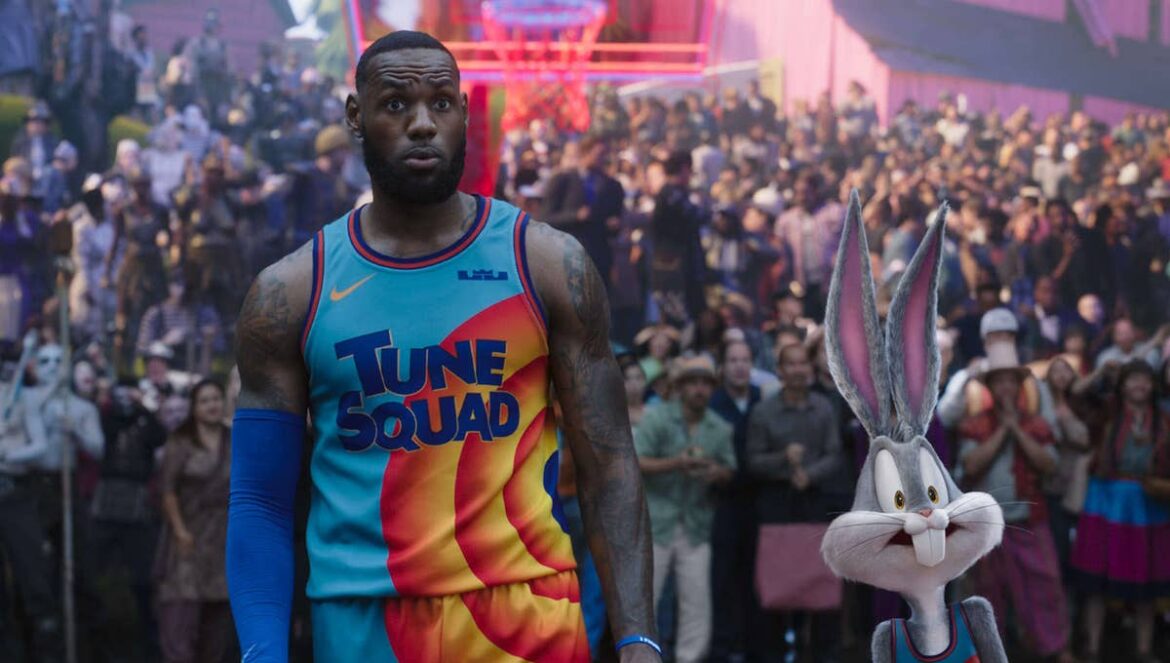 Here is the movie review of Space Jam: A New Legacy from Ray.  Ray is going to start doing some videos for us.  The video for this review had a tech issue so she kindly wrote it out.

I’m going to state right away so it’s clear where I’m coming from before we get into the meat of my review and I’m going to clarify a major issue most of you have with this movie. Get ready to Jam.

Alright, full disclosure here, I am a 90s kid. I grew up loving sports, the Looney Tunes and like every 90s kid into both of those things, I thought Space Jam was the greatest movie ever made when it came out in 1997. I also want to make clear my biases towards LeBron James. For my own reasons, most of which won’t come up here, I can’t stand him….he’s just not someone I’ve ever liked, I’d go as far as to say I even loath the man.

Okay, now that I’ve cleared up where I stand, I’m going to tell you all why I think Space Jam: A New Legacy is worth a watch….but not by YOU reading this.

I bet you’re thinking that this movie is some sort of reboot meant to capitalize on your nostalgic feelings aren’t ya? Well, it is….sort of. Let me explain. This movie exists so that 90s kids who are now in their 20s and 30s can show Space Jam to their kids and those kids will actually enjoy it. Full stop to tell you that I’m not a parent, but I do have a niece who I played a little experiment on last week. Story time…..

I showed my niece, who is six years old (and 3/4 if you dare ask her) Space Jam. Yep, I tried to show one of the new generation a movie that I loved when I was that age. Know what happened? She was bored out of her skull and kept asking for more snacks and eventually she started coloring and abandoned the movie altogether before the best part. I was really bummed, but then it hit me….the 6 can’t get Space Jam because she doesn’t get Michael Jordan. Part of the plot of our beloved Space Jam hinges on the viewing audience caring about and at minimum recognizing Michael Jordan…..without him the movie falls apart. It’s just some tall guy who the Looney Tunes ask to save them by playing basketball. I tried several times to explain to six who Michael Jordan was and what it was like when he played back in the day. I told her all about his Championships, how good he was, how he was all over t.v and how he was famous for dunking.. Six didn’t care. She couldn’t understand why he was important. She wasn’t interested. He was just some basketball guy to her who was in a movie with Bugs Bunny. She just wanted more of the cartoon parts of Space Jam and when it became clear she wasn’t getting that….she left.

This isn’t an isolated incident either. For this report, I spoke to several parents in my age group who like me attempted to introduce their kids to Space Jam recently and they ALL had similar experiences. It’s such a bummer when kids these days don’t appreciate things that we liked when we were thier age….studios know this bums us out so…..

So, out comes Space Jam: A New Legacy. Please note that the movie isn’t called Space Jam 2…..that’s very intentional. This movie isn’t a 2 at all, it’s A New Legacy. Quite literally this movie exists so that you, a fan of the original, whose kid just didn’t get it, will pay the money to go see this new one out of nostalgic needs, and your kids will love it because it’s designed for them to love it literally at ever turn…and you being you will go buy the toys for your small human knowing just as our parents knew that the movie we loved exists to sell stuff….it’s why this movie exists and it’s why Space Jam did in 1997. So, take your boxers out of your butt crack and see this movie for what it really is….it’s a giant toy selling, marketing guys wet dream and it’s not for you…it’s for the kids…..and your wallet.

Okay, enough complaining about how this movie is bad because it’s not the original, let’s talk about what even is Space Jam: A New Legacy and why you should totally let your kids see it….

Our plot
Father LeBron James (yes he’s himself here) is having issues with one of his sons. See, Bron-Bron wants his son to play basketball and the kid wants to be a giant nerd and build video games. It’s the first conflict we see and its where the heart of this movie lies.

So Father and son are having a disagreement. How does this turn into a Space Jam?

Well, An IA gets in the middle of this father-son argument and pits LeBron against his son in a battle for cyberspace. Yeah, the bulk of this movie, including the basketball game itself place in space….but not that space….cyber space.

Our villan here is Al-G-Rythm (yeah it’s a terrible name) and he’s an AI who just wants credit and somehow that turns into kidnapping. It’s a bit confusing at first but it clicks Eventually. Don Cheadle hams it up as the villan here and he’s honestly the best part of the movie for adults.
So, in order to save his son, LeBron must play basketball, but not like he’s used to. He has to play a version of the game his son has been building for the last few weeks, but with a few tweaks tweaks much higher steaks.

Que the Looney Tunes, they are spread all over cyber space and it’s up to Bugs and LeBron to get the gang together and shoot some hoops to save everyone. The quest to gather the Tune Squad is very fast and has quite a few blink and you miss it cameos. I was watching on HBO Max and paused several times to look at things. I should mention here that the animation is very good…..expect LeBron, he looks terrible….and LeBron looking like trash while nearly getting hit by a bus is always a good time for me. (See told ya it might come up) moving on…

If you are reading that synopsis and actually are thinking it’s a cool plot….please consider professional help. I can honestly say it’s ridiculous, but you know what? It works. Let’s not pretend that the plot of 1997 Space Jam was any less ridiculous.

The story takes a bit to get going, but when it gets there, it’s a fun ride….for the kids….remember this movie isn’t for you!

There’s lots of slap stick, fart jokes, character cameos and special events that will keep the kids interested. You, will be bored silly until the last 30 mins. This movie is 2 hours. 1 hour of that is spent not playing any basketball, and as a fan of Space Jam that’s absolutely the worst aspect of this movie (aside from LeBron), but the movie is fun. You just gotta sit back and let it happen. There’s alot of quick jokes that will go right over a kids head but you will enjoy those.

Is this movie high art? No. It’s just a movie made to sell toys and that’s sometimes okay. Let’s not pretend like the 90s Space Jam was anything other than that.

Oh, and one more thing….this movie has one thing going that the original doesn’t. It solves that problem I ran into with my niece that I mentioned way at the beginning of the long review. Knowing who LeBron James is, has absolutely no bearing on the plot of this movie. The lead could have been anyone. It could have been Steve Nash or Charles Barkley or even Kobe Bryant (R.I.P).

It’s a story about a kid and his parent who don’t see eye to eye about career choices and through some zany events have to learn to work together and see the others point of view. So, kids can relate.

Go into Space Jam: A New Legacy with the kids and understand its not for you and don’t take it too seriously. It’s just another silly kids movie. Be open minded and I think you will have a fun time. I know I did….yep and I’m just as shocked about what I wrote here as you probably are.

Thank you Ray for the awesome review!  We are looking forward to many more.