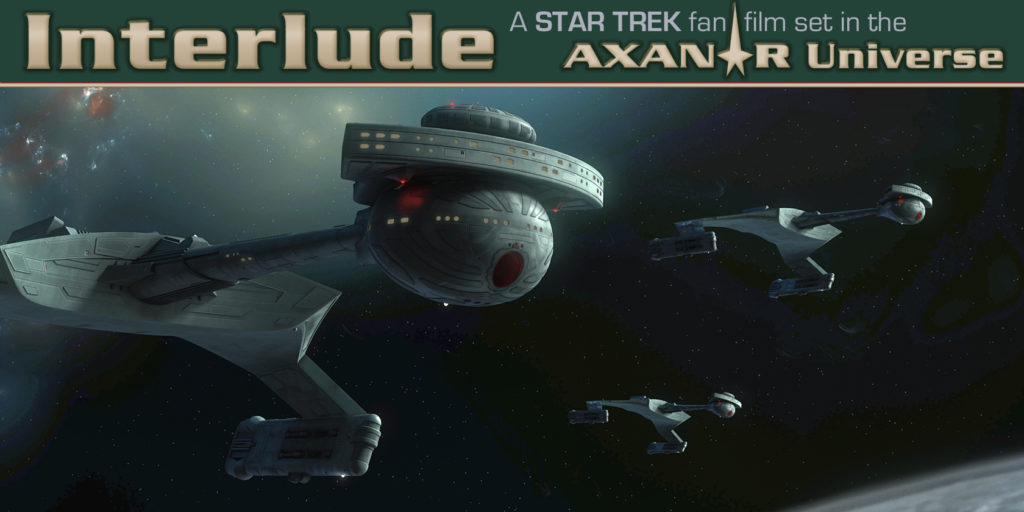 Today, April 5th, is generally considered “first contact Day” in Star Trek. On this day, when Zephfram Cocrane’s first flight in a Warp Capable ship attracted the intentions of a Vulcan ship passing through our solar system in 2063.  This first Contact was shown in the 1996 film “Star Trek First Contact.

This day is also one of the Key Fan Film Premier dates as many films want to be released on this day. Today, the date was locked up by the Axanar Fan Film “Interlude” which was written and produced by Jonathan Lane, Joshua Michael Irwin was the Director of Photography, and directed by Victoria Fox(Joshua and Victoria are well known as the team behind the Avalon Universe).  Interlude has had a few “premier” days, but they kept getting changed due to conflicts with other Trek Fan Films.

Interlude starts right where Prelude to Axanar ended, with the introduction of the new Klingon D-7 cruisers into the war.  While the film is just a short look at the first battle between the Federation and the new Klingon ships, it fills in a part of the story, that had only been shown in comic book form.

The film is a fast paced Fan Film, the first half is bridge and space combat scenes with the USS Ares, and USS Artemis and 3 Klingon D-7 Cruisers. the CGI is excellent, and the music score created by Kevin Croxton, was PERFECT. We also get to see Admiral Slater played by Steven Jepson with his first spoken lines after only being shown in a photo in Prelude to Axanar.  The last part is Captain Garth played by Alec Peters doing the documentary “10 years after Axanar”.

I need to highlight 1 particular actor, who played the Captain of the USS Artemis. Captain Jakande played by Warren Hawk. He brings a gravitas to the role that Harken’s back to other Black actors in Trek such as Avery Brooks and Tony Todd. Mr Hawk has that same tone in his delivery, and he has that strong sense of purpose in his command style that makes his crew follows his orders, even though it may lead to their deaths.

Overall this is an excellent Fan Film, and a worthy addition to the Axanar Universe.