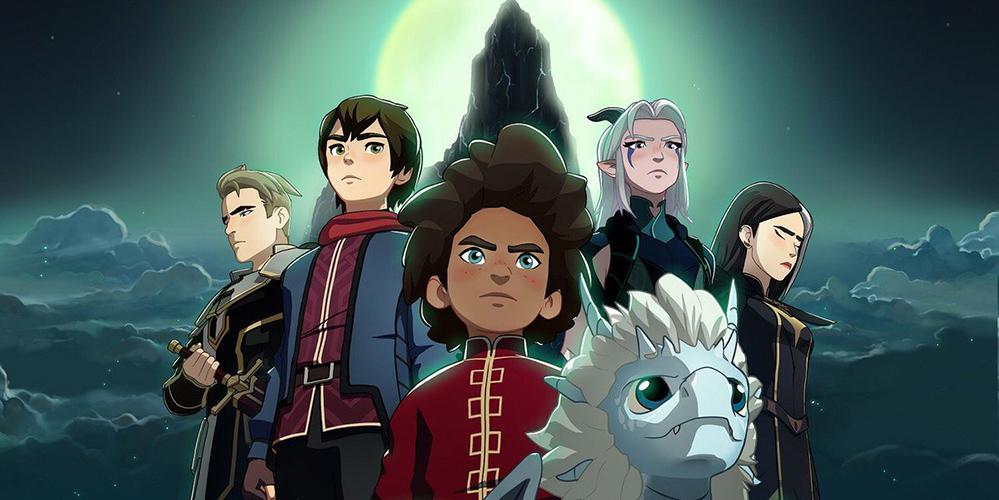 Netflix is cranking out a ton of great content.  There is a ton of wonderful live action movies and series.  They are also creating unique animation and anime.

Fellow Geeky KOOL creators, Morgan Straughan Comnick and Mandy Collins both highly recommended this series.  I am attempting to expand my viewing of anime.  I recently checked out The Dragon Prince on Netflix.

War has been raging between the kingdoms of humans and the magic land of Xadia.  Xadia has dragons, elves, and other magical creatures.  A band of Moonshadow Elf assassins are trying to kill the human king and his sons.  In the process, the princes, Ezran and Callumm, and a Moonshadow Elf assassin named Rayla join forces to return the egg of the dragon queen in an attempt to end the war.

The group goes on a hero’s adventure across the world.  In the process, the egg hatches and the Dragon Prince, Azymondias, is born. The group adventures their way stop the war and return Azymondias to his mother.  But it isn’t all happy and we await for season four to come out.

The Dragon Prince has wonderful characters.  The first episode spends a ton of time developing the characters so we know who our heroes see themselves as.  They show us who others see them as.  We develop the side characters into interesting living character.  We even get an understanding of where the bad guys are coming from.

World Building is prominent in this series.  It develops it through the journey much like the Hobbit or the Lord of the Rings.  We go exciting and interesting places in this crazy world.  It is a true adventure.

It is a heart warming epic hero’s journey.   We see our heroes grow from a group of misfits to a group that saves the world.

The animation is really well done. It reminds me a lot of RWBY.  It is beautifully created.  The characters have great expressions.  Only a couple of times did we get the over the top anime emoting.

This series is well written but yet still completely family friendly.  It is intelligent.  It doesn’t speak down to anyone.  It remains family friendly through it all.

This series started slow. It developed a lot of characters in a short time.

I really enjoyed this series.  After a few episodes, I couldn’t wait for the next episode.   The first three seasons were a fun ride. I am excited for season four.