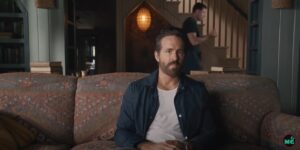 So after releasing a teaser yesterday which announced that Deadpool 3 was happening, and Hugh Jackman would reprise his role as Wolverine, Ryan Reynolds and Hugh Jackman sat down on the same couch as yesterday, and basically talked about the movies plot, and HOW Wolverine could be alive after we all watched him die in Logan.  This is brilliant Marketing, and will definitely ramp up the excitement for the movie which will be released in 2024.  take a watch, and let us know what you think.