I have a challenge for those of us that call ourselves Geeks. Let’s be nicer to one another this year. You would think that being nice is a given within geek culture but sadly, sometimes it’s not. I have discovered that those of us who were teased and bullied by the cool kids often treat fellow geeks or even new geeks just as poorly. I am not saying that this happens all the time or that every geek out there has a dark side. However, we can be pretty ugly to each other and those outside our circles. Here are my top 3 examples of mean-geek that needs to disappear in the new year:

**Attention Parents- I have used a few memes with inappropriate language. I have blocked it out as best I can. I am only using these to make a point.

1. The “you have not liked this as long as I have and therefore are not really a fan”– This one often gets directed at the newbies that are just getting in to a particular fandom. The conversation usually starts when someone mentions that they love say Superman. They have only seen the movies and think that Clark Kent is awesome. The mean geek will comment on how they have loved Superman since they were 5 years old and know the whole back story of his existence. The movies in their eyes are an abomination of the whole franchise. Or they just come out and say “Dude you are not a really fan if you have only seen the movies.” Sometimes it turns into a lecture that leaves the newbie confused, annoyed, and thinking “what a tool.”

Dudes, who cares if someone has been a fan for 5 minutes or 50 years? Instead of a lecture try talking about why that person liked the movies. Recommend some comics or websites that they might enjoy. Try encouragement instead of the better than thou attitude. A good friend encouraged me to check out some Star Wars novels and comics after he found out that I loved all the movies (yes, even the new ones). Now I watch the animated Clone Wars series and have 3 comic subscriptions. This has also made me a better Librarian to the Star Wars crazed kids I work with. 2. “She is too hot to be a geek girl” or “She is just dressing up to get attention and has no idea about that character”– Yes, there are girls out there that just do things for attention. News Flash: there are dudes out there that do the same thing. I have seen more fake geek girl bashing in the past year than I care to recognize. STOP IT!!!! STOP IT NOW!! If you don’t like what some chick is wearing don’t look. Better yet, follow your Mom’s advice and keep your yap shut. If you don’t, you just might get called out on the carpet like this person:

Or better yet… this person:

I could write a whole post on fake geek girl bashing. It’s mean. It’s stupid and it’s pointless. There are bigger things in this world to get your Batman boxers (or panties) in a twist over. So what if girls dress up as characters that they think are cool or sexy. Who cares if they only like Thor because Chris Hemsworth is smokin’ hot…  Guess what? Your whole fandom is not going disappear or be corrupted by any of these things. Finally, for the love of all that is Geeky and Nerdy don’t do this: (this is for both guys and girls)

Because if I am the chick in that costume. and you yell that at me… be prepared to have a shiny yellow boot wedged in your backside. (or vintage, yellow, mary jane, high heel)

3. If someone loves a fandom that you hate don’t make fun of them for it– Confession time.. I have done this and I am not proud of it. I really dislike Twilight. I liked the concept of the 1st book but hated the rest of it. I even had in my bio here that “sparkly vampires are lame”. Recently, when a co-worker was telling me how she loved Twilight, I had to resist the urge to roll my eyes. I mean she is a grown woman and a librarian. She should realize that the writing is terrible and Bella Swan is the worst role model ever! Well, she totally put me in my place even though I didn’t utter a word. This is what she said..

“I love Twilight. I know that it’s horrible writing and really cheesy. While I was reading it I had a mental red pen marking all the mistakes I was finding in the pages that the editors missed. But, to me the books were an accumulation of all the things I loved as a little girl and teen. They were everything that I made up and loved as a young girl; bad writing and all.”

She loves those books and has read them over and over until the covers have worn off. It is what she geeks. How on earth can I argue with that? We often dismiss things that we don’t like. It’s easy to tease and snark about things that we find ridiculous or annoying. Kids, those things might be everything to someone else. It might be the reason they started reading again, it might have helped them through a bad spot in life, they might see themselves in one of the characters, and the list can go on and on. We need to get on the anti-bully bandwagon in our own subculture. I know that I need to snark less and find ways I can identify with others who might like a fandom that I don’t. That is why I took out the comment about “Lame, sparkly vampires” and I am working on finding new appreciation for different fandoms. I am not calling for a PC movement where we can’t argue or disagree. Some of my favorite conversations have been with friends about something we disagree on. We usually discover another side that we might not have considered. Plus a bit of friendly banter can be fun.

I am calling for us to be a bit nicer. Stop making people who are new to a fandom feel inferior. Stop accusing people of being fake and be confident enough in yourself that if they are, it doesn’t matter.  Stop hating on people who don’t like the same things as you do. Find some common ground. Find your geeky kindness. 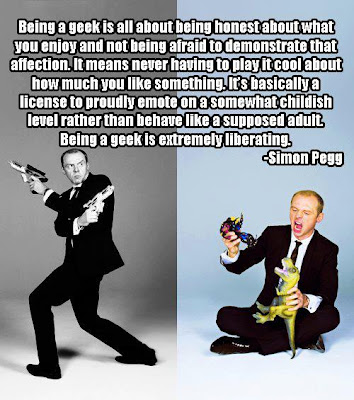 Have a Happy and Nicer 2014 Geeky friends!