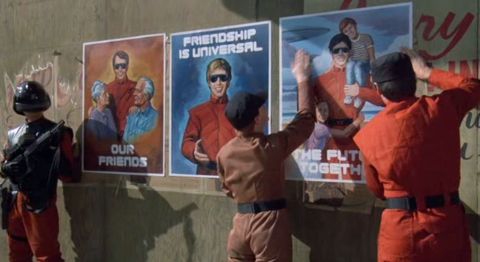 Back in the 80s, miniseries on television were the rage.  Roots, The North and the South, Shogun, and The Thornbirds were huge for ratings.
May of 1983 had a miniseries that I couldn’t wait to see.  V, The original miniseries, was a two night special and must watch for my 13 year old self.

I really loved this miniseries and the second miniseries.  I was almost 13 when the original miniseries aired.   Would this made for television science fiction series hold up to my memories?

V was a series about aliens coming in 50 massive spaceships.  These aliens pretended to be friends of ours but instead manipulated our governments and media.  They turned people against each other including making scientists the enemy.

At the heart of this mini series is how easy it is to manipulate humanity.  Come with promise and gifts and something for them, people are willing to overlook all sorts of horrible things.  Throw in separating out groups and demonizing others and you have the psychological world of V.  Some people see things coming and even speak up about them but the majority ignore the signs.

Scientists are framed for a conspiracy to prevent them from finding out the truth about the visitors.  If any member of a family is a scientist, they are hunted down.

The psychological nature of this show was amazing.  It hit on the aspects of manipulation intrigue.  It shows how easy people can turn on others. This was not an action science fiction show but a thinking science fiction series.

I loved Marc Singer as cameraman Michael Donovan.  He was a perfect leading man for this series. He had flaws but a great spirt.

Don’t forget Robert Englund (Freddy Krueger) as the loved Visitor, Willie.  He was bumbling and had trouble with English. But when he could save Caleb (Jason Benard) from the frozen death trap, we learned to love Willie.  He didn’t want to hurt the humans but rather be friends.

The acting in this made for television mini series was really good.  It had a chance to be all cheese but it wasn’t.  You could feel how things were affecting people.  Leonardo Cimino as the Jewish Holocaust survivor Abraham Bernstein was supurb.

V used a lot of imagery to link the visitors to the Nazis.  Their emblem looks similar to a swastika.  Their uinforms has a nazi like look. Even their laser weapons looked like German Lugers.  The “Friends of the Visitors” mirrored “Hitler Youth”.

This mini series was only two episodes long.  It is followed up by a second miniseries but the feel of the series changes.  I wish we could have had more of the original miniseries.

I was shocked that I this series from 1983 was better than I remembered.  It not only holds up but has become even more relatable.  It caused me to pause and look at life and how easy we can slip into a world manipulated by an us versus them mentality.

I LOVED this miniseries.