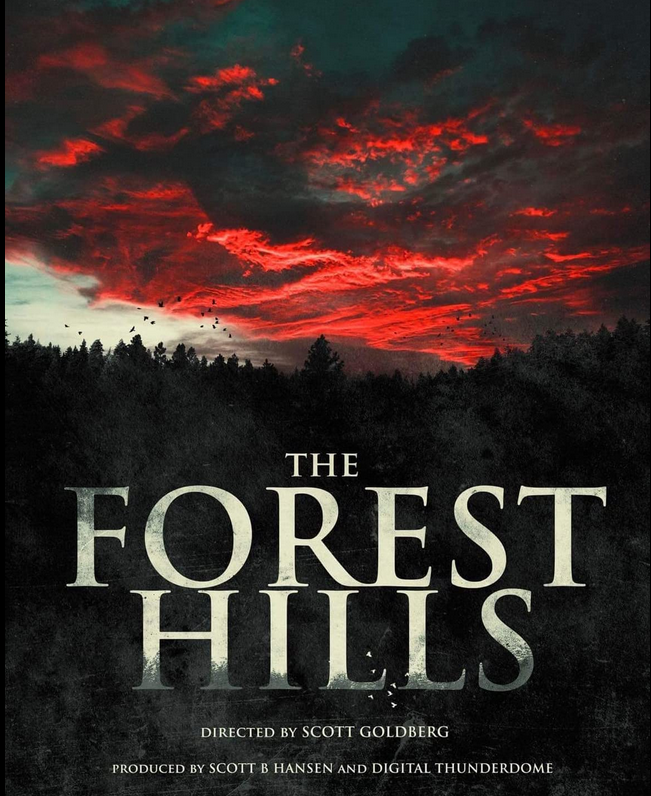 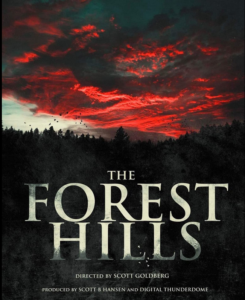 Tonight Ashley Grant and I got to watch a “rough cut” of the film Forest Hills, produced, directed and written by Scott Goldberg, with Scott Hansen as the director of photography.  The film stars Edward Furlong, Dee Wallace, Chiko Mendez III in the title role and Shelly Duval in her first role in 20 years.  Just for information purposes, a Rough Cut of a film, means the music hasn’t been added, and no color correction has been done on the film. Think of a Marvel movie without the CGI effects, and you get my drift.

The movie is a slow burn thriller, yes it is gory in spots, but the gore isn’t the main focus of the film. The main focus is watching Rico deal with his trauma, both with and without drugs. I am reminded of 1960’s and 1970’s horror thrillers where the setting conveys the creepy factor, more than any graphic violence. It really reminded me of Deliverance, and how that movie was shot. As a PTSD sufferer, watching Rico on screen(in this case my TV lol), struck me deeply as a lot of what he dealt with, I have dealt with. early in the film, when talking to  Social worker, she asks him about medication, and he replies “I don’t like the way they make me feel”. Full stop, I have had this EXACT conversation with my mental health doctor in the past, as finding the right medication and therapy is one of the hardest things a person dealing with any type of mental illness can do.

Scott Hansen does an amazing job with the cinematography, the shots in and over the woods are breathtaking, and they really give you the sense of isolation that being alone in the woods can make you feel. There is a “monster” in this movie, but you never see it close up. this does 2 things, it allows you to see him from Rico’s POV, and like Rico you have to wonder “is it real, or is it just part of Rico’s decent into “madness?

The Direction by Scott Goldberg is top notch, and he understands pacing and plot development and is able to move the film along from point A to point B and so on. The film is dedicated to Horror Master George Romero, and it is shot in “his style”. The slow pace through the first 2/3rds of the film allows the audience to get to know Rico, and become invested in his struggle as his world falls apart around him.

As for the individual actors in the film:

Edward Furlong plays Billy and he is excellent as the only real friend that Rico has, although you have to wonder what his motivation towards Rico are. By the end of the film, your opinion of Billy will probably change, but Edward pulls off the duality of the character very well. He has come a long way from being the scared kid in Terminator 1. Being a child actor, is tough on actors, however Edward brings the edge needed since Rico is having a case of the zoomies throughout the film.

Dee Wallace plays Angela a local shop owner who at one point had hired Rico as a dishwasher. She has known the family, and giving Rico a job was at Rico’s sisters behest. However Rico is not a model employee and Angela has to fire him. While not a huge role, Dee approaches it, with the same ferver as she her roles in films such as Cujo, The Howling and E.T. The Extraterestrial. She is a professional in front of the camera, and brings her brand of “scream Queen” to the film.

Shelley Duvall plays Mama, and it is a role she obviously had fun doing. As her first role in 20 years, one could expect her to “phone it in”, but from the first moment she is on screen, she give is her all. She laughs at a medical diagnosis, like it’s just another pothole in the road. she commands every scene she is in, her voice is definitely the “strongest” in the film. The struggle the producer had to secure her being in the film is something other directors had to deal with. I am so glad she came out of retirement to be in this film.

Chiko Mendez plays the titular role of Rico, and boy does he NAIL IT squarely on the head of the pin. Watching his struggle, as he deals with even simply things like talking to his sister on the phone, are just so perfectly done. When this film makes the rounds at the film festivals, Guarantee their will be best actor nominations for Chiko. He is just that good, playing a tormented soul. You can tell he chewed up the dialog and spit it out with a gusto, that reminds me of classic thriller actors. Whether he is playing a sane Rico, or one going though a Manic phase, he puts everything into it, and makes the performance believable.

Overall – 4 out of 5 stars – it is not a modern horror film, but one that pays homage to the greats like Hitchcock and Romero, both in tone and pacing. It is just enough of a different “feel” to make it stand out from the crowd. While Hollywood are making and remaking things like Scream and Halloween, the Scott’s(Goldberg and Hansen) have made something that makes you remember how the genre was made 50 years ago. That my friends is a VERY GOOD THING