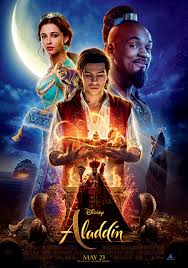 Disney’s remake of the classic animated film “Aladdin” was released this weekend, and it is actually not a bad film.  The live action film which stars Mena Massoud as the “street rat” Aladdin, Naomi Scott as Princess Jasmine and Will Smith as the Genie(an iconic role that Robin Williams voiced in the animated film).  This remake holds true to the original, with just enough changes that allow the main characters to pay homage to the original, without feeling “forced”.

The cinematography and choreography are a beautiful color palate of the entire rainbow, as even the Desert scenes have a shimmer to them.  The costumes are equally vibrant and they remind me of the costume design in the movie Black Panther.  The Guy Ritchie both Directed and penned the Screenplay along with John August. Ritchie who is known for “big” movies such as Sherlock Holmes and its sequel.

Marwan Kenzari plays the Nefarious Sorcerer Jafar. Jafar is not played as a “straight villain”, he is actually rather nuanced in the film and we learn why he is power hungry.

I know there was a lot of negative press based on how the first trailer showed Will Smith as the Genie, but they actually got it right, and he played the role with just enough of his brand of “style” to make the character his own.  There are a couple of added characters including a Prince who courts Princess Jasmine and Jasmine’s Handmaiden “Dalia” who is a love interest for the Genie.  The animal characters of Iago, Apu and Rajah are back and the live action versions are “up to snuff”.

The CGI is kept to a minimum, and it doesn’t overshadow the story, of 2 people who are really on a quest to find their place in the world.  The Movie has about a 60% rating on Rotten Tomatoes, but I think that rating is a bit low.  While not a “home run” it is one of the better Disney remakes, and is a movie that people should go and see, just to see the musical numbers if not for anything else.

Movie Score – Solid B to B+