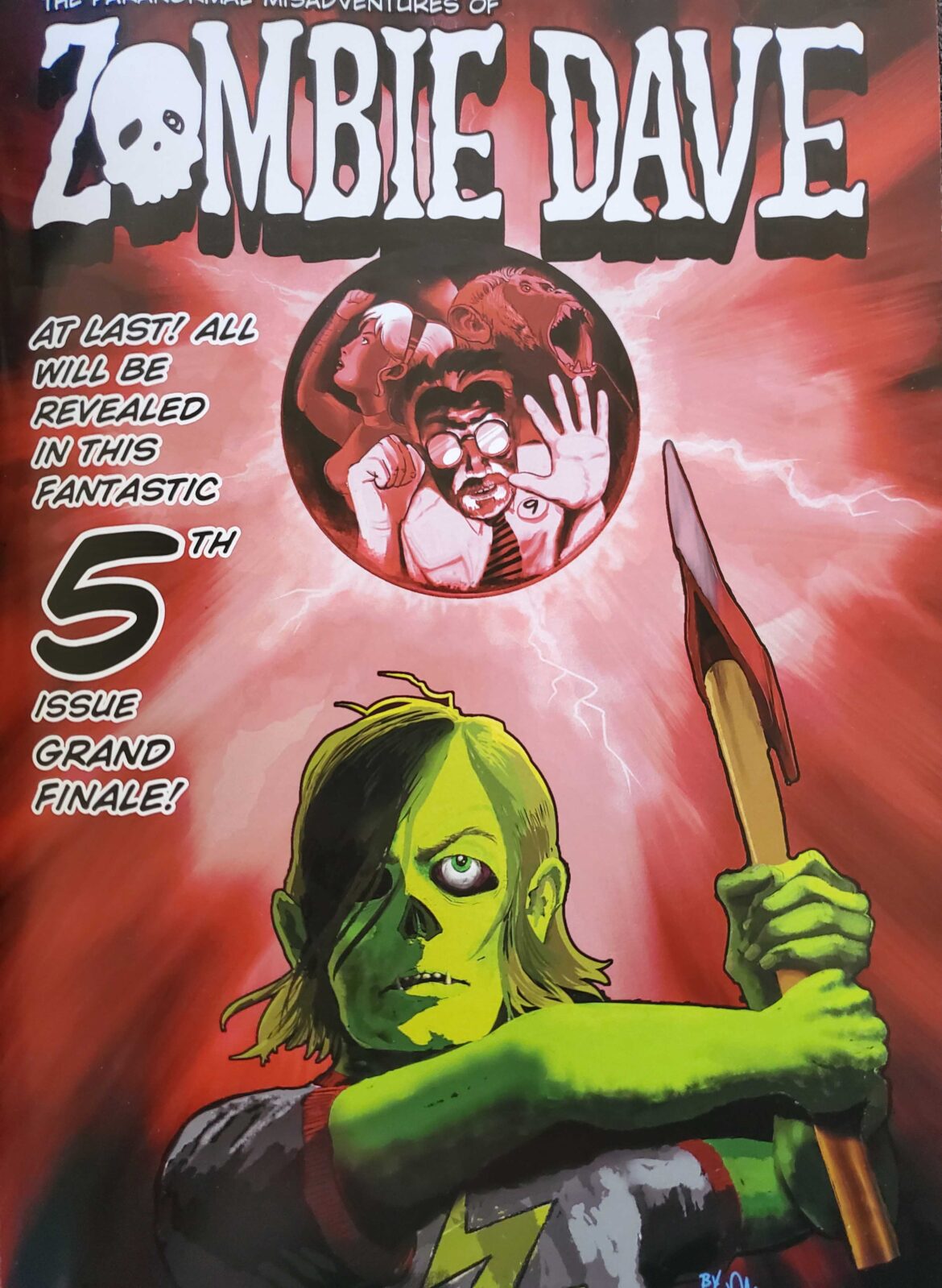 Zombie Dave Issues 1-4 were a fun ride and read.  The issues  were wacky and a ton of fun from the independent publisher, Stone Pi Media. I eagerly awaited issue #5 to come out.

I have issue #5 in grubby little hands, would it live up to expectations and end the series on a high note or will the ending leave me wishing for something different?

In a post apocalyptic world, the Management attempts to save the world and undo the evil that The Corporation inflicted on humanity.  The blue faced Will aka Number 9 is the leader of this ragtag group but the star programmer is a zombie named Dave.

The Red Orb is twisting the game world into our world.  The group is attacked by dragons, tentacle monsters, giant apes, portal arms, and much more. The group tries to contain the Red Orb into a container but it soon bursts free.  It has become way too strong to be contained like that.

This issue cleverly brings flash back to the origins of Zombie Dave, Will (the blue faced leader), and how the Red Orb came to interact with them.  It is all very mad scientist fun.

Zombie Dave realizes that the Red Orb can be hurt because a piece was broken from it in the past.  Dave gets an idea to chop it into pieces and throw small pieces into numerous portals so the orb cannot reform.  Zombie Dave excels at chopping with his ax.

In the end, Dave and his friends save the day.  Zombie Dave decides it is best for him to go into the M.E.R.D.E. REALM with Cheetamonkulus The Blue with the final piece. Dave stated that it isn’t safe for a Zombie to be in this world and sadly leaves.  But Zombie Dave comes right back to our realm after he figures out, “There are no pork rinds in the M.E.R.D.E. REALM.”

Art:
The art style reminds me of a mix of Keith Giffen’s Amush Bug and his run on Justice League .  It is a fun and at times zany art.  Some panels are loaded with details and others are close up looks at the characters.  The characters are realistically drawn but not the uber-realistic look.

The art really works with the wacky story.  It is a great fit for the storytelling of this imaginative wild story.

Story/Plot:
This story is bizarre and nuts but in a great way.   It is in the vain of Ambush Bug, Legion of Substitute Heroes, Captain Carrot and the Zoo Crew, and Deadpool. There are moments it reminds me of the crazy but KOOL storylines from the 1970’s The Defenders. I can tell that Matt Decker (Creator) enjoyed many of the same bizarre stories from 70s and 80s comics that I did.

This is a throwback to a time when comics weren’t meant to be taken so seriously.  Instead they told a clever and fun story with wackiness. This story is full of geek humor.  It pokes fun at everything from Deck Building Card games, to D&D, and all over the place. It is a love story to geeks through humor.

I was so excited to get this issue to read and review.  Life got in the way and I finally got around to sitting down with my copy of Zombie Dave #5.  This was more than an enjoyable time.  I smiled through the whole thing and laughed at the jokes.  This comic is a breath of fresh air.  Matt Decker has a masterpiece of an indy comic series and  Zombie Dave #5 is the capstone of a magnificent story.